We could discuss here about folders and files which could be removed from the WinSXS and NET Framework folders to reduce even more Windows 8.1 ...


EXPERIMENTAL BUILD (Skydrive link) :
[You must be registered and logged in to see this link.]

This my list of folders and files removed by this WinReducer 8.1 Components :

Hope you will have more ideas to add in this component to improve the Windows size reducing ...

Yes, thank you, but they are already removed if you use WinReducer, and I'm talking about "WinSXS and NET Framework folders" ...

As far as I know, the WinSxS folder could be reduced to as little as 90 folders inside. Doing that would obviously break Windows Update, though.

I will try to upload the whole list today.

billybully wrote:As far as I know, the WinSxS folder could be reduced to as little as 90 folders inside. Doing that would obviously break Windows Update, though.

I will try to upload the whole list today.

I'm interested by this, because I have a new wonderful project in my mind, and I think you will be really interested !

Can't wait to hear about it, winter

@winterstorm: Yes, why do you think I'm not talking about Windows 8.1?

So, recently, I vLited a 64 bit Windows 7 image, and I selected to clean the WinSxS folder. The results are as follows:

This is the smallest WinSxS folder I've managed to build on a Windows 7 image, but one could possibly reduce it a few MB more if it wasn't for the Manifests folder (which is the largest one), because he happens to be a bitch when it comes to reduce him (due to the long ass names of the files it contains). A curious thing is that vLite leaves some language pack related objects inside the WinSxS if you don't select the according language pack. It makes me thing that, for example, if you want to keep Spanish, all Spanish related objects must be kept in the WinSxS.


Now, I'm posting this because I think it might apply to Windows 8 too. If there's some courageous soul out there who wants to try to reduce WinSxS on Windows 8, be my guest.


Here's a list of the files inside my WinSxS folder:

@winterstorm: you must have deleted something else, because I deleted all wow64 too and it always work, I've tested it a hundred times

here is my winsxs 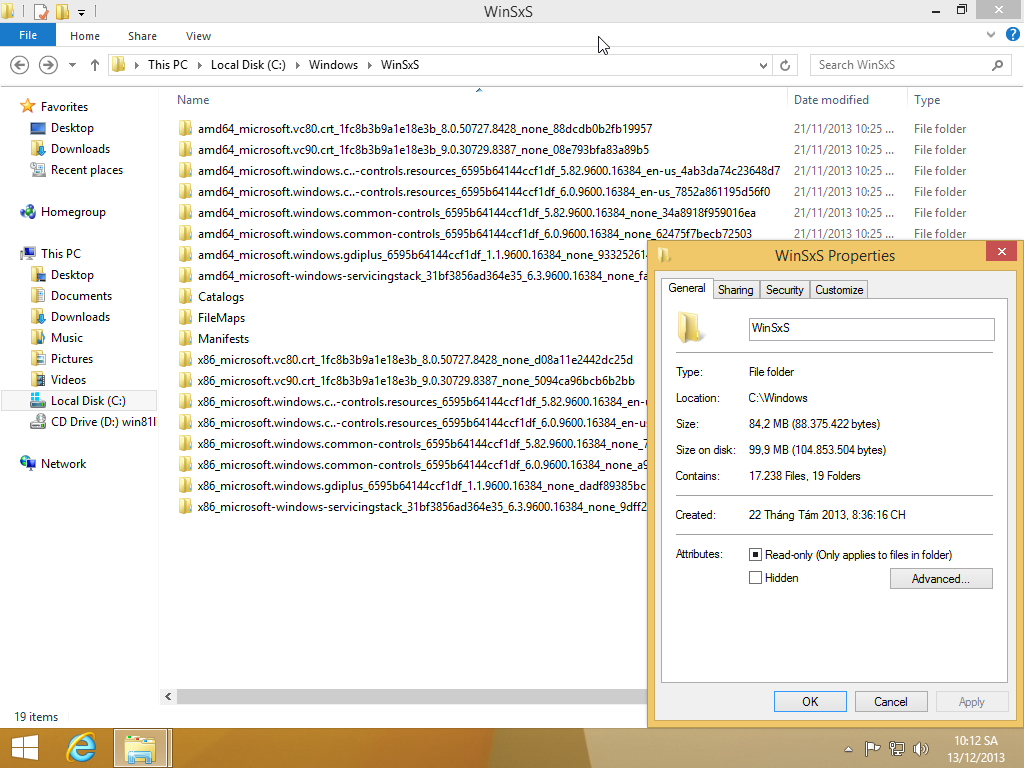 @mrpotter & billbully: do you guys have full "updateability" in Windows Update?
I think it would be good to have two winSXS methods.
One for people who want to keep windows Update, like me

One for people who just want the smallest ISO possible and dont care about Windows Update..

@theKramer: as i posted before, it will break Windows Update

and for now I think that winsxs removal without breaking Windows Update on Windows 8.1 is still a mystery

@theKramer: Yeah, dude. There's no way to reduce WinSxS (I mean, reduce it as extremely as we do) without breaking Windows Update.

Message reputation : 100% (1 vote)
@billybully: Yeah, you should try it, i've used that configuration since Windows 8 and it works good

Thank you mrpotter2510 ! This is an amazing sharing !

I will create a special build, this week-end to try this but for the folders "catalogs, filemaps and manifests", did you clean them also ?

Thank you for your answer ...

I must admit I find this kind of "extreme" WinSxS removal an interesting exercise but also one that is not really productive in the end. Mrpotter2510 refers above to "winsxs removal without breaking Windows Update" as a "mystery". Well, it is hardly any mystery at all. I would recommend reading some information about what the winsxs is and what it does. Granted, Microsoft did a poor job of how it had been handled up to Windows 8.1. But with the latest Windows release there is very little sense in my opinion to continue "reducing" and "cleaning up" this folder. Windows (at long last...) can do a pretty good job of that on its own.

With Windows 8.1, Microsoft also added an important DISM command switch, which is "Dism /Online /Cleanup-Image /AnalyzeComponentStore". You can read more about it here http://technet.microsoft.com/en-us/library/dn251566.aspx. It shows (among other things) how much of the WinSXS size is shared with other Windows folders. Running it now on my Win 8.1 x86 installation shows that my WinSxS folder is 1.90 GB but 1.71 GB of it is shared with Windows - meaning these are all hard links to various Windows folders.

Now, without going into technicalities, the NTFS file system implemented since NT4 supports a feature known as hard links. It provides the ability to keep a single copy of file which can appear in various (multiple) folders. The important thing is that hard links do not take any additional space. A file may appear to be located in 10 different folders but it still occupies as much space as it does as a single file.
To put it simply, WinSxS folder actually IS Windows (since the days of Windows Vista). What we see in all other Windows (and Program Files) folders are only hard links to the files residing in all those thousands of WinSxS subfolders. Unfortunately, Windows Explorer can't properly handle hard links and treats them as separate files, occupying additional space. The above DISM command can partly remedy that. There are also external programs that can help to avoid this confusion. I recommend the excellent Hardlink Shell Extension from Hermann Schinagl (http://schinagl.priv.at). After installation, it adds a few two things to the system, including easy creation and deletion of hard links. Importantly, it adds an additional tab to file (or directory) properties in Windows Explorer, which lists (any) existing hard links. Right-clicking on a file and choosing "Properties" and then the new "Link Properties" tab will show the type of link, its reference count and enumerate the hard linked files in their folders. The other handy feature is a small red arrow in the left lower corner of any file that is hard linked anywhere on the disk. This way, you can have a quick look at any Windows and Program Files folders and see what's going on.

OK, so what does cleaning up the WinSxS folder do? Deleting most of the files from this folder DOES NOT yield any significant space gain. What happens is that the files do not reside in the WinSxS folder anymore but are instead "moved" to their appropriate Windows directories (that is actually not entirely accurate but I will just leave it like that for the sake of simplicity). That also explains why deleting a file from a Windows folder (in most cases) does not result in any space gain, unless we also remove the hard linked file from the WinSxS.

Another important feature added to Windows 8.1 is one more new DISM command switch. This one is actually used by Winterstorm as a means of cleaning the WinSxS on the first system boot up. What is important about the "/ResetBase" switch added to ""Dism /Online /Cleanup-Image /StartComponentCleanup" is that it "removes all superseded versions of every component in the component store" (once again, have a read on [You must be registered and logged in to see this link.] What it means is that after adding Microsoft updates and running this command all "older" updated file copies are removed from the WinSxS folder. Up until Windows 8.1, the WinSxS kept growing and growing as Windows kept all file versions, and these were not hard linked. If you looked into the WinSxS on Windows 8 or 7, you could for example see 10 or more shell32.dll files in separate folders, each occupying nearly 20 MB (again, I'm simplifying things as there was an update to improve that by means of file compression).

To sum it up, the whole Microsoft's concept of deploying and servicing Windows installation is based on the WinSxS folder. Its integrity is the only way to keep Windows Update intact. "Extreme" cleaning does not yield significant space gain. Sure, there are files in WinSxS that are not hard linked anywhere, but they are kept for various reasons (plug and play comes to mind as an obvious example) and I know far better ways of spending time than hunting for and deleting those files.

I'm all for reducing the bloat of Windows but, as I mentioned elsewhere, my priority will always be a FULLY working Windows installation, an important part of which is Windows Update. What I find really great about Winterstorm's Windows Reducer is that it keeps Windows Update fully working. There are other programs out there to slim down Windows 8.1 that use a more "elegant" package-oriented approach throughout, similar to what is implemented on Winreducer's "Integrated Default Features" tab. The only problem is that this approach makes it very hard to have fully working Windows Update - most updates will install just fine but some will error out and refuse to install (speaking from hands-on experience

, I also knew that thing before, but the problem is, as you say, explorer can't identify hardlinks, so the Windows size still be recognized bigger than the actual size, with no different from duplicate files. And when your C:\ drive running out of space, you still can't install your software anymore. This thing is very important for anyone have a small HDD space like me

. And about Windows Update, we can integrate it first, then reduce the OS without a problem

Hey guys, you really made my day !

This is really, really interesting, and I think bart3lon lightened us about the boot winsxs folder reducing. Even with reducing this folder, the boot wim will not be reduce as we think !

I'm agree with you my friends, I really enjoy reducing windows (yes, with a fully functional system according to what I need to do) and even if I loose Windows Updates (integrated them is possible before reducing process and should be better anyway).

So, I'm working on creating this highly experimental build to see what happens ...

Windows starts without troubles even all Windows Features are removed !

But I don't know if there are software bugs or consequences !

Yo, Winter. I just built a fully working 64 bit Windows 8.1 boot.wim file that is just 165 MB (90 MB lighter than the original). I removed all the folders inside WinSxS except for three. Mind trying it? 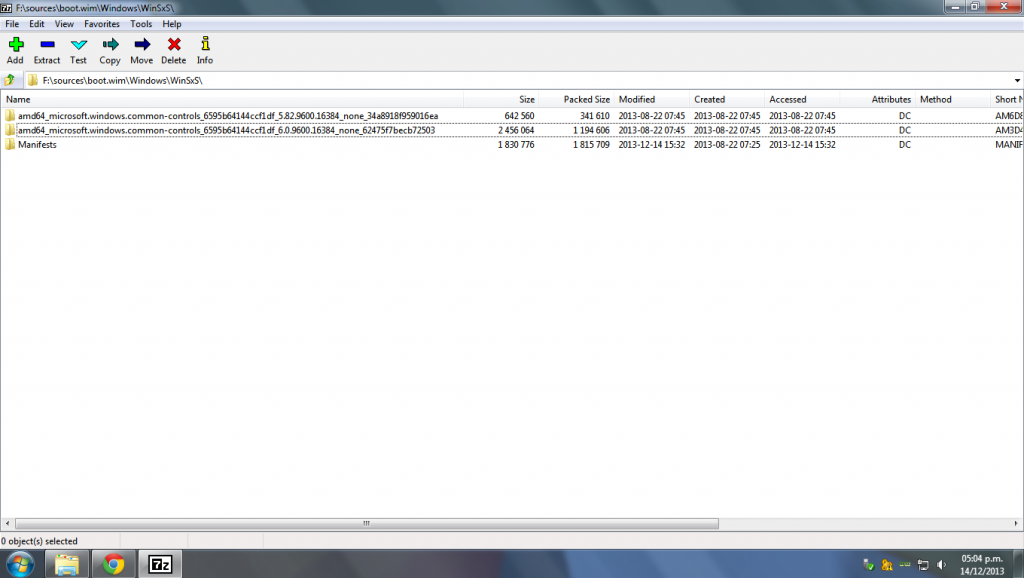 Excellent ! I will test that ... And I will release a test build today ...

. Hey, look. I will build a new boot.wim file today and I will try to remove the .NLS files in the System32 folder. There are more than a hundred of them, and, as far as I'm concerned, they aren't needed in a boot image. I will report back later.

Did you try to remove fonts?

Yeah, potter. I removed everything in the Fonts folder except for a XML file, 35 VGA fonts, and the Segoe UI fonts (which are 6). There were some minor cosmetic failures in the GUI, but nothing that big to worry about

Hey guys, excellent and really interesting ... I will release a special build in less than 1 hour ...

Nls files , and other ideas from billybully and mrpotter2510 will implemented later ...

Winter, I created a batch file that removes a lot of unneeded files from the boot.wim System32 folder. Check it. You might find a use to it

. I haven't tested it yet, but I think it will work (some of the files listed might already be removed by your software, I don't know, I just did it, haha).

Thank you billybully, I will have a closer look on your interesting list !

You could use this build, like the stable one ... To use experimental components, go in "Remover" tab then, "Optimizations" and use the 2 "EXPERT" to cleanup Net Framework folders and/or WinSXS ...

To all your questions, I could answer yes ...

So, it will completely clean winsxs folder, in both install.wim and boot.wim !